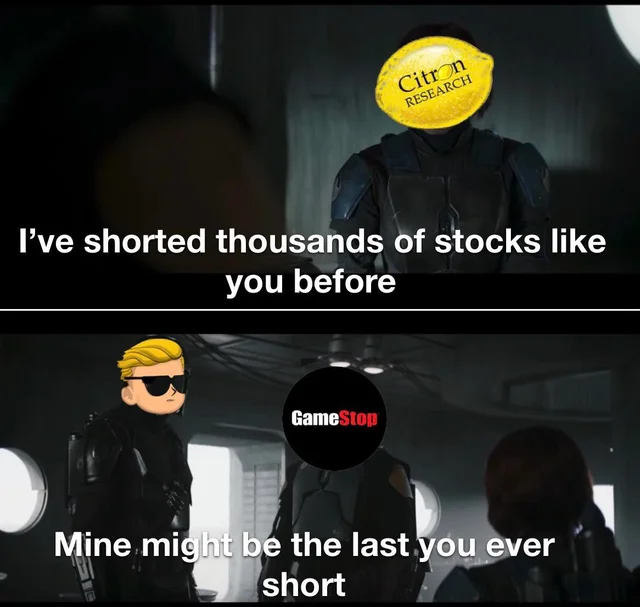 
“im getting GME leaps I believe in the autism of Michael Burry i also will give them at least 6 months to find a viable business plan” -u/Turlututu_2, Jun 10, 2020

We cover this zoo, as well as a zoo full of more...exotic animals: 4Chan Biz. Topstonks combs Wallstreetbets and 4Chan to figure out what they’re saying and where they’re making moves.

Gamestop (GME) is a brick and mortar retailer widely understood to be long past its heyday, and most investors wrote it off Gamestop as a modern day Blockbuster Video. The stock has been the talk of both the finance and the tech world ever since they exploded to a 1500%+ gain from their 2020 lows set in April. But this is January of 2021- who was in this at the bottom?

Well, we know who was early, but did they hold on even as GME got cut in half in the Spring?

It's hard to say if any of those Early 2020 bets panned out, but I do suspect at least a few of these early bulls stuck with the trade. Who got it right AND made $$$$ on the call? And how could you have gotten in the trade?

To figure that out, we have to back to the summer. GameStop first got on our radar when they reported earnings after the close on June 9th. There were big options bets being made going in that event, with the bulls expecting a positive earning surprise that would strike fear into the hearts of the bears betting against GME. 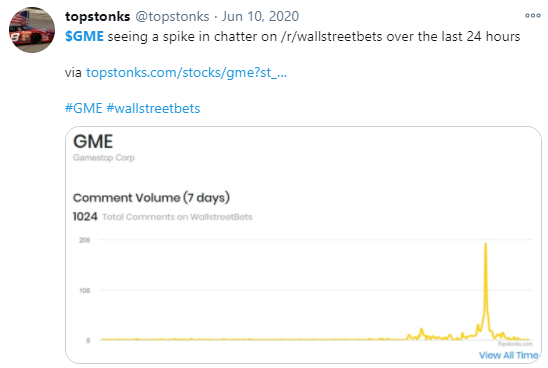 However, the June 9th earnings event turned out to be a dud for the bulls and the stock mostly traded between $4 and $5 for most of the summer.

“What am I missing with GME? Might as well but shares in Blockbuster” -u/goarmy007

But why was r/wallstreetbets and 4Chan so focused on whether this defunct retailer would survive or not? Because of what is called a short squeeze.

So many people saw the bankruptcy writing on the wall that it became one of the most heavily shorted stocks in the market. According to the Wall Street Journal, short interest in December amounted to 138% of tradable shares. It can be over 100% because the same shares can be lent out multiple times by different holders.

Short squeezes occur when short sellers are forced to buy back stock in the market in order to close their negative bet. But if new buyers come in and push up the price, short-sellers scramble to close their bets, creating strong upside moves like what we saw in GME over the last several months.

There was no short squeeze on June 10 but we took note of the high interest in the trade and tracked the heated debate in the comments. 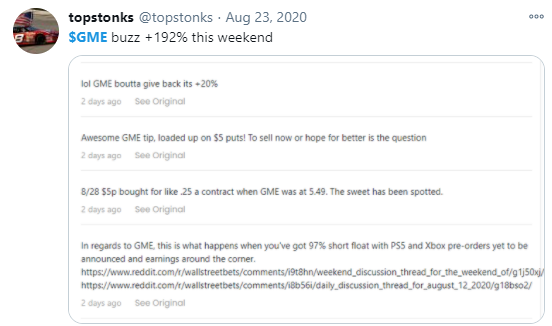 The next big date was September 9th quarterly earnings and we noted the surge in buzz going into the event. The stock price ran up from $5.10 on the opening after our Tweet to $7.70 at the close right before the earnings announcement. Again the results disappointed and the bears seemed in control, driving the stock down as low at $5.87.

But GameStop was supposed to be on the way to bankruptcy, and the failure to go down further after seemingly disappointing earnings made the bears nervous and the bulls hungry. The buzz kept building on both r/wallstreetbets and 4Chan and by September 15, the squeeze was on. And the stock hasn’t looked back since- it’s around $42 as I write this. 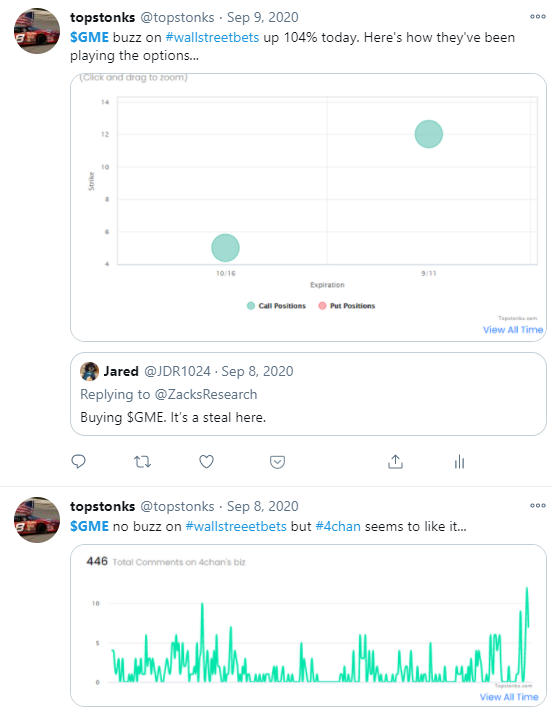 Are You A Player or a Spectator?

If you knew about this bull/bear battle, would you have been involved? Would you have bet against GME, or with GME? If you drilled down into the conversation, the contrarian bull case was pretty compelling:

“Business cycles are a thing. Currently Gamestop's industry is about to hit peak business over the next 2-3 years. So judging past revenue based on the back end of a console cycle wont help with future projections. You're right they do have an old business model, but they are making massive inside changes and starting to make the right decisions regarding running and changing the business model and the board is starting to improve with recent additions. This is what everyone is sleeping on with GME, they just see the past business model and think it will die.

In reality they are pushing for a massive turnaround with a majority online presence. Having the Chewy founder come in with a 10% stake is a major win for GME. You're speculating that they wont turn a profit simply because there hasnt been one this year. That doesnt mean anything moving forward. Worst case scenario, im wrong, gamestop fails. However the stock pulls a APRN, they fall to $2 a share and then 100% shorters are all forced to cover, rocketing the SP for a week or two. You can still get out with a profit if timed right.”-u/Stonksflyingup, Sep 11, 2020

If you knew about the debate, would you be swimming in tendies, like the wallstreetbets and 4chan gamblers; or would you be licking your wounds like Citron Research?

Best wallstreetbets DDs of the week